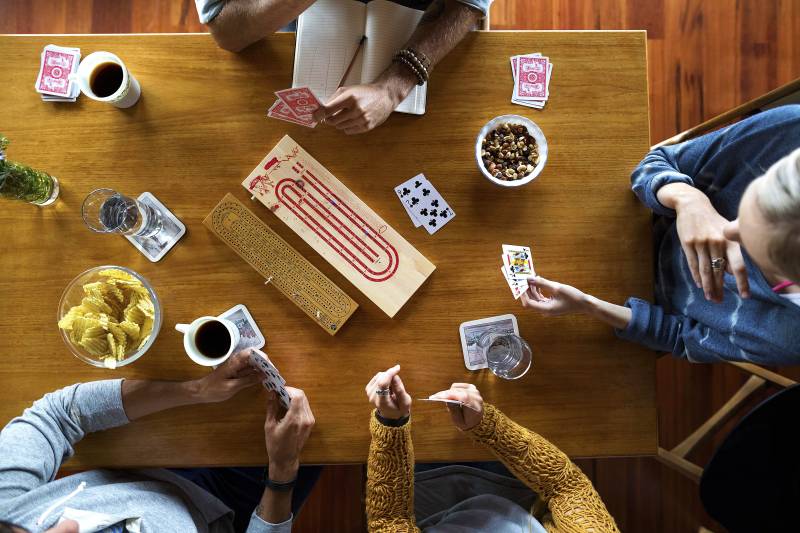 To start off you will need a deck of cards and a cribbage board.

To play a game of cribbage you need at least two people, but you can have three or four people.

4 people | 5 cards each sitting opposite each other

To determine who deals first, set the full deck of cards in front of everyone and then everyone cuts from the same deck. Whoever cuts the lowest card wins the deal first. The dealer also changes people every time a new hand is dealt.

The object of the game is to score 121 points which are pegged on the board by points in your hands. Each hand determines how many points you will have.

A standard cribbage board usually comes with three different colors on the face of it with 121 holes in each color. It also contains three pegs of each color which are kept in the back of the board in a small compartment. A peg is used to keep track of the points that you have scored throughout the duration of the game.

After all cards are dealt, put your cards in order from smallest to largest (Ace being the smallest and King being the largest). This may make it easier to count the points in your hand.

• Pairs (two of the same card)

• Flushes (four or more of the same unit)

Determine which combination of cards will get the most points because you will have to discard two cards if six cards are dealt and one card if five cards are dealt so that you have four left in your hand.

Discard two cards that you are not going to use for your hand. These discards are placed face down in a pile in front of the dealer which is known as the crib. The crib is a four card hand that is made up of discards which the dealer will count for extra points at the end of the hand.

After the first person lays their cards down and announces the face value, it is the person to the left of them (or in a two person game, the dealer) who will lay down one of their cards in an attempt to add up to 15 for 2 points. Another way to score two points is to lay the same card right after the last one is laid (for example a 2 laid after a 2). Another way is to lay a card down in a run of three (for example one person lays a 7, then the other lays a 6, then the other person lays a 8) which would result in the person saying 21 for three and then peg three points on the board. The last way to score points while laying down is to add up to 31. This is the highest number that someone can add up to.

Repeat Step 6 going back and forth laying cards down and adding cards up until you reach 31 or cannot go any longer, in which the person that laid the last card before the other person couldn't go, gets a point for a go. After the person gets a go then the person that couldn't go before (without going over 31) starts over and lays another card face up from their hand.

Once all the cards have been laid down it is time to count your hand again. To start counting your hand you need to first determine all the different ways that a card can add up to 15. If you have any 15s then you need to say 15 for 2 and if you have more than one combination that adds up to 15 then you proceed saying 15 for 4 and so on until you finish counting your combos of 15. You also need to determine if you have any pairs, runs, or three-of-a-kinds.

If you cut the cards at the beginning of the game and cut a Jack instead of a 9 or any other card, the person that cuts that Jack gets two points for cutting the Jack.

The person that did not deal (or in a two person game, the person to the left of the dealer) will count their hand first and proceed around back to the dealer. The cut card as mentioned earlier comes into play and can be used to help get you more points in your hand. Once the dealer counts his main hand, remember the dealer also has the crib or all of the cards that were discarded in the beginning of the hand to count now for more points.

Once the counting is finished, this process starts all over but the person to the left or the person that did not deal last time starts dealing the next hand. This process continues until one of the players gets 121 points or more altogether, therefore completing the game.

To read more great content in LAKE magazine, you can purchase or subscribe online HERE and support this independent publication. By becoming a member you would receive the latest issues PLUS great Lake + Co. Shop perks!

PrevFeatured Photographer | Jordan Mileski |...
NextIf You Build It They Will Come