Eat: Wild In The Kitchen.

What is Minnesotan cuisine to you?

Jim Kyndberg, Executive Chef of FireLake Grill House & Cocktail Bar in downtown Minneapolis, is always exploring what Minnesotan cuisine means to him and how it is evolving in the local dining scene. While the cuisine is constantly being redefined, there is a certain sensibility to what drives Chef Jim's menus, both in the restaurant and at home. While many know typical Midwestern cuisine as being heavy in meat and potatoes, chefs like Jim Kyndberg are becoming more diverse and willing to explore a wider palette of grains, vegetables, meats, and flavors, a trend helping to broaden the horizons of what Minnesotan cuisine is and can be. Chef Jim responds to the availability of a broad array of ingredients from Minnesotan farms. With that, he is able to establish an authentic way of connecting to the state's heritage and people.

"One thing I personally do believe in relation to Minnesotan cuisine is that it has to be real. I don't feel as a whole we like a lot of smoke and mirrors when it comes to our food. Be honest and cook from your heart and people seem to appreciate what you have to offer."

What was the history/thought of the restaurant before the
farm-to-table movement became trendy?

When FireLake opened its doors 14 years ago, they had decided that they wanted to be a restaurant that created the best food they'd ever had, and ultimately they realized this came straight from their Minnesotan backyards. The grocery store tomato would never taste the same as a tomato from their garden. Even then, Minnesota had an abundance of growers, ranchers, and producers that they knew they wanted to highlight in the region. Their "DNA" meant capturing the flavor of the flame (on the grill or the rotisserie), timeless warmth, using fresh and local meats and produce. It also meant providing guests with a crisp, seamless, and friendly atmosphere, yet maintaining a place where Minnesota does business.

With respect to the food, they wanted to use real wood. Mesquite on the wood burning grill. Apple, pecan, cherry woods in the pit smoker. The restaurant's name literally comes from the flame kissed flavor of its food in combination with the land of 10,000 lakes.

The menu today continues to be geared to the local, regional,
and sustainable philosophy that it did when the restaurant first opened. Over the years they have had more time to work with their local farmers, growers, and producers on distribution and build those relationships.

Chef Jim remarks, "It was the connection and long term commitment the restaurant had to Minnesotan cuisine and local sustainable business practices which made the job irresistible for me. I had a chance to take the style of food I had fallen in love with and present on the big city stage."

What do you look for in a local purveyor/producer?

Chef Jim's first qualification for a local purveyor is integrity. He wants to ensure the purveyor's passion and effort is showing through in their work, as this directly affects the food the customer is putting in their mouth.

"If they care about their product as much as I care about mine we have a chance at building lasting relationships."

Secondly, he looks for great customer service. "In working with farmers, you often have to take into consideration what they cannot control. They must play by the rules of nature. Storms happen, draught happens, and hey, just about any weather can happen in Minnesota. But if they take the time to let me know these situations with as much advance notice as possible I can adjust my menus and keep my customers satisfied."

"The Bison Bourguignon recipe has been on FireLake's menu for almost three years and has really earned the title as a signature dish. Growing up in Minnesota, pot roast was a staple no matter what the season. And that is basically what Bourguignon is - really good pot roast. It is done in the French style of searing your meat and then cooking low and slow over a long period of time, incorporating great vegetables, and of course quality red wine. The other thing I love about this dish is the main ingredient - Eichten's Bison. Eichten's is a local family owned farm just north of the Twin Cities which FireLake has been proud to support since day one." 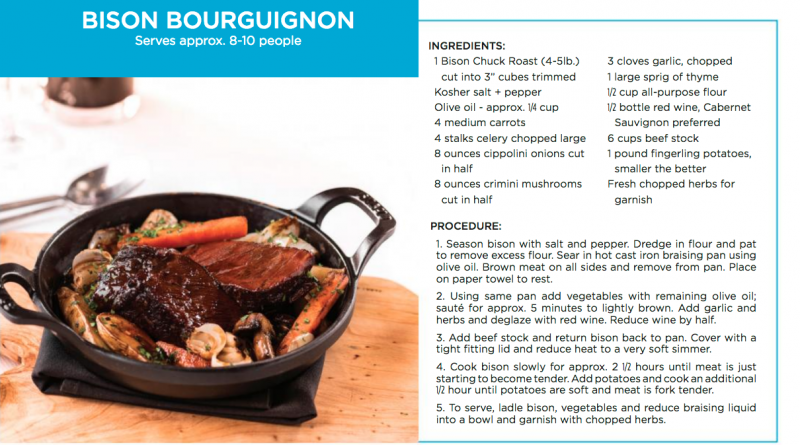 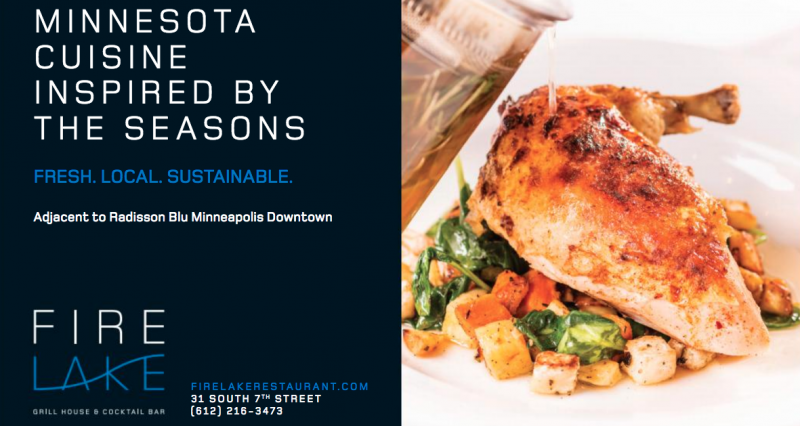