Blacklist Artisan Ales - The Backstory. The Beer. The Brewer.

Written by Melissa Maki THE BACKSTORY Blacklist Artisan Ales was born of friendship. Founders Jon Loss and Brian Schanzenbach grew up together in Brainerd, MN and have been close friends since the seventh grade. When they get together, they have a habit of concocting crazy ideas and carrying out seemingly impossible plans. Once, with a couple of friends, they constructed a raft and spent an entire week oating down the Mississippi River, from Brainerd to Sartell. Brian and Jon left their hometown after high school to pursue distinctly different goals that would ultimately prove to be complementary. The pair eventually reunited in Duluth. As they both worked regular jobs, they schemed about combining their skills and passion into a brewery. Brian began his seven-year tenure at Fitger's Brewhouse and worked on perfecting his homebrew recipes in his spare time. Jon put his advertising, management and marketing expertise to work, starting his own consulting rm. He also honed his craft beer knowledge--becoming a Certi ed Cicerone (the craft beer world's equivalent to Sommelier for the wine industry). They launched Blacklist Artisan Ales in 2012 as an innovative Kickstarter project where subscribers got a new beer and related piece of art each month--think CSA for breweries and local artists. This provided them with needed capital and a unique opportunity to reach an audience that would ultimately help test market their beer. The recipe most favored by their initial fans would become Blacklist's agship beer, the Or de Belgique. The encouragement Brian and Jon received during the Kickstarter period fueled their determination to establish a brewery. They jumped at the opportunity to lease a corner of an existing brewery, which enabled them to brew in larger quantities. A re next door to the brewery in February of 2014 resulted in serious smoke damage, which delayed the brewery's growth. Much of Blacklist's equipment and some aging barrels of beer were destroyed. But fortunately, they were able to rebuild and take over the entire space. By late 2014 they were not only back up and running, they reached a critical point: Brian was able to quit his day job to devote his attention to brewing full time. In mid-2015, TJ Estabrook joined Jon and Brian as a partner - but not before enduring a lengthy trial period. Considering Blacklist their "baby," Jon and Brian subjected TJ to a rigorous audition process that involved spending time with their families on multiple occasions to ensure everyone would get along. TJ had always imagined being involved in a craft brewery but his job as a tax attorney in Milwaukee kept him otherwise occupied. In 2014, TJ and his young family decided to seek out a slower paced life in Duluth, the now proclaimed craft beer capital of Minnesota. Since ful lling his dream of becoming a brewery owner, TJ has become an integral part of the team. His legal and accounting background, and his passion for talking craft beer, helps round out the Blacklist skill sets. All three partners have an active role and are passionate about the brewery's growth. As is the case with most small businesses, each wears multiple hats, pitching in as needed to keep the brewery running smoothly. As Blacklist has grown, relationships and quality remain primary considerations. "We've always been most interested in the culture that surrounds beer. We'd rather make a million friends than make a million dollars," says Jon. 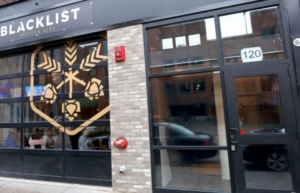 The Beer.
Blacklist's beer is distinctly different from the majority of the beer you'll nd on the shelf, both in terms of pack- aging and style. It's available in corked 750 ML bottles, reminiscent of champagne. The beer is refermented in the bottle, which gives it a lovely effervescence. It's also strong, but well balanced. The taste belies the alcohol content, which is typically 8 to 10 percent ABV. "We like to say we're Belgian-inspired," says co-founder and brewer Brian Schanzenbach. "We don't want to be pigeon-holed as a Belgian-style brewery. But it's the best way to describe the style we are doing--to let the customer know what they're getting into." Craft beer is a recent phenomenon in the United States when compared with Belgium's rich tradition of small batch brewing. Trappist monks have a long history of brewing in the region; they've been perfecting their craft for hundreds of years, even before Belgium became a country. The strict quality controls of the Trappist beer designation help ensure a quality product, informing the palate of drinkers and setting a superior standard for other beers in the market. In Belgium, beer culture is interwoven into the fabric of everyday life. Each beer is served in its own special glass--to best highlight its avor and character. Quality beer is integral to community celebrations and events. Many remote villages have a town beer produced speci cally for local consumption, which serves as a local source of pride. Blacklist's beer can be viewed as a response to an increased demand in the U.S. for artisan goods that em- phasize quality and authenticity. The thriving Twin Ports beer scene is evidence of wonderful support for locally produced craft beer. Blacklist is lling a niche in the local market--fueling a growing appreciation for different styles. Belgian beer is often compared to wine due to its complexity. It ages well due to its higher alcohol content, much like ne wine. "What's fun about that styles that we make is that we cross into a hazy gray area of wine to beer," says Brian. "We get a lot of people who start off saying 'I'm really just a wine drinker,' and then they end up liking a style that we make--that's really fun to see." It's beer to reach for on that special occasion: a birthday, a family event, and a night out. "The idea is to enjoy our beer as an experience," explains Jon Loss, Blacklist co-founder and marketing director. A passion for their high-quality beer has driven Brian, Jon, and TJ to seek out and plan a Blacklist taproom, which will help cultivate this experience. It will also serve as a test kitchen, allowing Blacklist to brew small batches of new beers and connect more with their customers. Brian is looking forward to the taproom because he misses the face-to-face interactions he had with customers when he worked at Fitger's Brewhouse. The feed- back is something he takes seriously, as he strives for continuous improvement. "When you make a product and it goes out for distribution, you don't get to see how people react to your beer. As a brewer I'll be excited to have that exchange again," he says.